January 21, 2014
I am a fan of code coverage as long as you aim for 100% coverage "of code that should be tested".  I don't think you will get some of the benefits of code coverage if you just turn it on for all code and say "let's aim for 80%".  A good code coverage tool should allow you to specify what to include or ignore by namespace, class name and even attributes (such as the "GeneratedCode" attribute).

OpenCover is a nice code coverage tool as it meets these needs and it's Open Source.  Later in this post I will go over how to set it up just using batch files to keep it nice and simple.

I use code coverage to set myself goals so I know what I am aiming to test in a certain time period.  For example, I could say "by the end of the week I want to have all my MVC Controllers tested" - so I add a filter to include the controllers in the code coverage report.  So I use it as a way of "defining success" while writing tests.

Keep in mind that having 100% coverage on some code does not mean you have tested all scenarios!  All it does is prove you have tested one scenario down that path.  So I use it as an indicator of whether something has been tested, not a measure to say the code works in every scenario.  But that is a lot better than nothing and accidentally missing some code!

To test the steps I am documenting here, I have created a very simple sample application.  If you want to play with this before adding it to your project or just see how it works, you can download the sample application here: https://github.com/nootn/OpenCoverExample.

For these instructions, I assume you have a Test project with some NUnit tests already succeeding.

Include or Exclude more

There can be cases where auto-generated code ends up in namespaces you want to include, but you don't want to have the generated code included.  An example of this is T4MVC which generates code for your MVC project to create strongly typed references where you usually need to use magic strings.  One way I found around this which is included in the batch file above is to use the "excludebyattribute" switch.  You will notice above I have put -excludebyattribute:"System.CodeDom.Compiler.GeneratedCodeAttribute" which works if the generated code has that attribute (as T4MVC does).

Running in TeamCity with No TeamCity Changes

I couldn't find a TeamCity add-on for OpenCover (there was one for PartCover built in) and the only instructions I could find to get it working involved installing things on the server.  So that was another good reason to get this working as a batch file (so it can run in TeamCity self-contained within it's own source code).

This is how I got it working (using TeamCity version 7 at the time of writing) with the Code Coverage report showing as an "Artifact" so I can just click the link in TeamCity to view it: 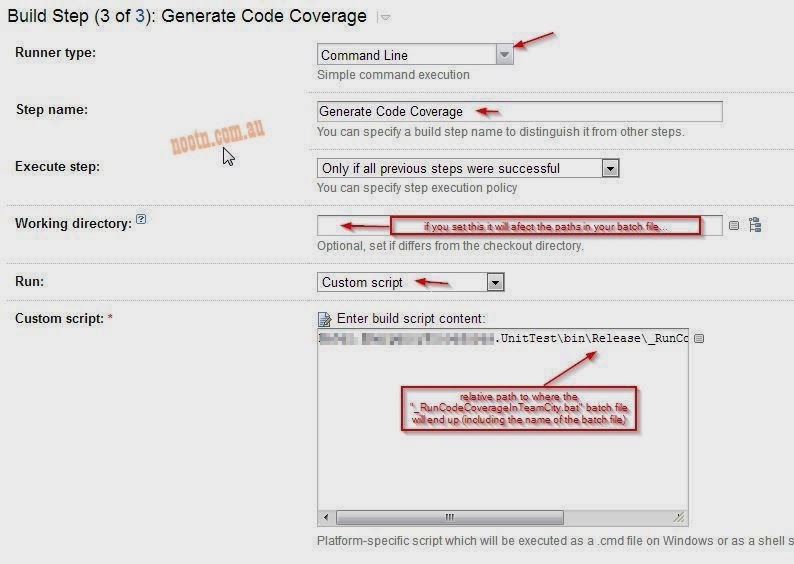 Hopefully this helps you get started on your Code Coverage journey!

Yet another blog post on how to validate email addresses

I have read a lot of blog posts and Stack Overflow answers over the years on "the best way to validate an email address".  This article uses the example of validating in ASP.NET MVC but the theories could apply to any code base. What I have learnt is that like most things, there is no "best" way, it depends on your requirements. So I thought I would outline my most common requirements and how I do it. Usually my requirements for capturing an email address are: Let the user know if they have possibly not typed in an email address at all (E.g. maybe they accidentally put their name in the email field).  This should be done client side so it is fast. I want the email validation to be as "loose" as possible, not check every known variation.   However , I want my mail sending code to work.  I don't want to queue up an email task on a background process for it to not be able to deal with the email address supplied. Optionally (not always), I want